What Happens When We Die

In my work, I get to see things that would blow your mind.  Like when I do a reading for someone I get flashes of lives they have lived in the past.  I can see if they are male or female, their partners, their family members, where they lived and so on.  I don't mention this in the readings all the time unless there is something from the past life that is relevant to today. If it turns out to be relevant most of the time it has to do with Love and Partners that return to us in this life.  One thing I have noticed, most of the time it comes with conflict and struggles as if the past has not been dealt with in some way.

In my opinion, both Past Lives and NDE's should be studied together because in a way they go hand and hand.  When I communicate to spirit on the other side, I"m always amazed at how vivid the visions are, the things they show me are incredible, understanding how and where we go when we are not in the physical body is something I don't think we will ever truly understand until we get there ourselves.

the world of non-physical because DYING is such a harsh word for such a beautiful journey.

This topic is something that I have been interested in since I was very young.  I would ask my family members that question, "What Happens When We Die" Never really getting the answer that satisfied me.  I'm a very curious person and I wanted to find out more about NDE (near death experiences) and Past Life Memories I went on a quest for information and boy did I find a lot of information on this topic.  I believe science can play a huge role in finding out more about this subject without losing sight of the spiritual side of it.  Below is some more information from leaders in the field and I'm happy to share this information with all of you.  Thank you for reading my blog!

A first-person account of Jim B. Tucker's experiences with a number of extraordinary children with memories of past lives, New York Times bestseller Return to Life expands on the international work started by his University of Virginia colleague Ian Stevenson. Tucker's work, lauded by the likes of parapsychologist Carol Bowman and Deepak Chopra, and described by some as quantum physics, focuses mostly on American cases, presenting each family's story and describing his scientific investigation. His goal is to determine what happened - what the child has said, how the parents have reacted, whether the child's statements match the life of a particular deceased person, and whether the child could have learned such information through normal means. Tucker has found case studies that provide persuasive evidence that some children do, in fact, possess memories of previous lives.

Among others, readers will meet a boy who describes a previous life on a small island. When Tucker takes him to that island, he finds that some details eerily match the boy's statements and some do not. Another boy points to a photograph from the 1930s and says he used to be one of the men in it. Once the laborious efforts to identify that man are successful, many of the child's numerous memories are found to match the details of his life. Soon after his second birthday, a third boy begins expressing memories of being a World War II pilot who is eventually identified.

Thought-provoking and captivating, Return to Life urges its readers, skeptics and supporters alike, to think about life, death, and reincarnation and to reflect about their own consciousness and spirituality. 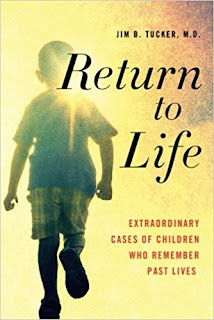 Is There Life after Death? Fifty Years of Research at UVA

Does some aspect of our personality survive bodily death? Long a philosophical and theological question, in the 20th century this became the subject of scientific research. Fifty years ago, in 1967, Ian Stevenson, then chair of UVA's Department of Psychiatry, created a research unit—now named the Division of Perceptual Studies—to study what, if anything, of the human personality, survives after death. Dr. Stevenson's own research investigated hundreds of accounts of young children who claimed to recall past lives. In this Medical Center Hour, faculty from the Division of Perceptual Studies highlight the unit's work since its founding, including studies of purported past lives, near-death experiences, and mind-brain interactions in phenomena such as deep meditation, veridical out-of-body experiences, deathbed visions, apparent communication from deceased persons, altered states of consciousness, and terminal lucidity in persons with irreversible brain damage. As the division enters its second half-century, what are its research priorities and partnerships? History of the Health Sciences Lecture Co-presented with Historical Collections, Claude Moore Health Sciences Library and the Department of Psychiatry and Neurobehavioral Sciences, UVA

We are all spiritual beings trying to be human.  We should be proud of the journey we've taken on!  It's not easy being green or human.

More Books on the Topic!  Shop On Amazon Here!

The Dating Game and You

Spirit and the Ganja